The digital revolution is transforming the way people do business and, whether we like it or not, innovation is now at the heart of our banking system. Traditional banks are no longer lone players in the field. Fintech innovators are gaining momentum by fully digitising their services and revitalising customer relations. These new players know how to leverage banking data to offer new services that are simpler, faster, and more user-friendly.

Their success is evident. A recent report from the FCA found that digital challenger banks doubled their market share between 2019 and 2021 and are now managing 8 per cent of UK personal current accounts. Operators such as Monzo, Starling and Revolut have been able to attract millions of customers by rethinking the banking experience around costumer needs. This phenomenon is also unfolding across Europe, with players such as N26 in Germany and Boursorama in France.

Regulators have intervened to establish a legal framework. The UK regulator, the CMA, set the tone for open banking by creating the CMA 9 – the nine largest banks and building societies in the UK. They have a combined market share of over 90 per cent, and were part of the initial open banking initiative. The EU has its own equivalent, with the Payment Services Directive. Both regulations allow consumers to share their banking transaction history with a regulated player other than their bank in order to access new services like personal finance management or obtain short-term credit almost instantly. These new “open banking” regulatory frameworks are the institutional recognition that banks no longer have a monopoly on financial services.

As of January this year, there have been more than five million users of open banking in the UK. The initial body, the Open Banking Implementation Entity, is set to be reformed to extend its powers and find further adoption.

In the UK, the Open Banking Implementation Entity (OBEI) allowed the successful launch of the system, which had already attracted more than five million users as of January 2022. According to a joint statement released on March 25 by the CMA and HM Treasury, the OBEI will soon be reformed. A new supervision body will be granted extended powers to further boost open banking and reach mass adoption.

This is a Copernican revolution, and in the EU especially, it has been the subject of fierce debate. This is especially the case if we consider the next step, open finance. It will extend access to the data of incumbent banks, from payment accounts to all the other areas of finance, including mortgages, consumer loans, security portfolios and other kinds of assets.

For British and European banks, riding the wave of openness is essential to maintaining their competitive position amongst fintechs, but also against American and Chinese Big Tech firms, which are increasing their market share in payments and financing services. These players are making extensive use of data – an area where many traditional banks are falling behind – because they are failing to effectively complement the customer knowledge acquired through interpersonal relationships with real time financial data. Cooperation between traditional banks and fintechs regarding data is becoming a major issue of technological sovereignty.

For a growing number of European banks, it is now a strategic axis of development, allowing innovators to develop new concepts by capitalising on the distribution capabilities of banks. Conversely, banks can accelerate and make their innovation process more agile by building mutually enriching partnerships with fintechs. As a result, new services are quickly available to the widest possible audience. In France, for example, Boursorama and Fiduceo paved the way for account aggregators on the local market very early on. Specialised subsidiaries of the Société Générale Group, such as Treezor and Moonshot, also offer turnkey banking and insurance services that are easily integrated with the offerings of new digital financial players and online merchants.

By 2025, banks must offer their best products and services through a new mode, known as banking-as-a-service, essentially creating an ecosystem for financial services on fintech to provide access to non-banking businesses. An adjacent system – banking-as-a-platform – enables fintechs to rent their services to a bank, enabling greater flexibility for different classes of customers. They will build services similar to those offered by Tide in the UK and Shine, Societe Generale’s neo-bank for professionals in France.

By embracing this cultural change and opening their offer to third-party services themselves, bankers are entering the era of integrated finance or invisible banking, being in the customer pocket at the fingertip of their mobile or metaverse. It’s a significant step to go beyond their historical role as funders or payment operators, following the clients in their digital ecosystem and remaining the trusted partner of their daily life.

Explainer-in-brief: fintechs face-off with the watchdog for legitimacy

Welcome the era of integrated finance, led by banks and fintechs partnerships

Sun May 15 , 2022
Alivia Kaplan has a worldview that sets her apart from most. Growing up, her family moved 19 times, exposing her to different cultures early on. “I think moving definitely made me very adaptable,” said Kaplan, who expects to graduate in May with a bachelor’s degree in economics and strategy from […] 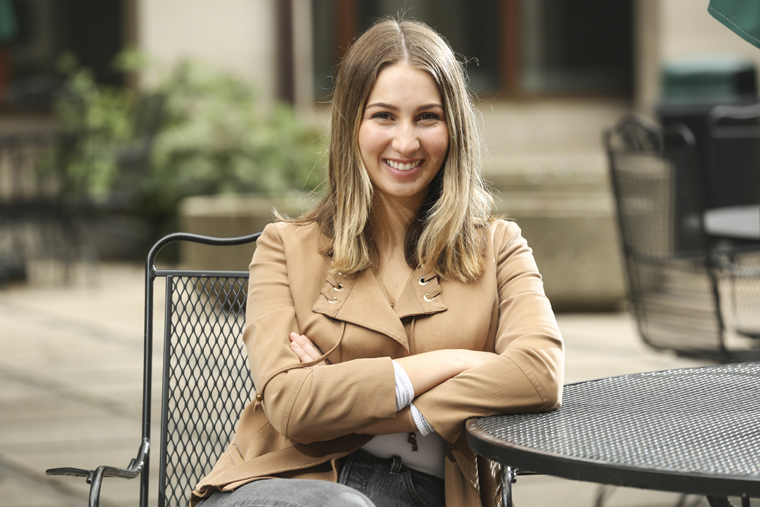