The logo of Swiss bank UBS is seen at a branch office in Zurich, Switzerland June 22, 2020. REUTERS/Arnd Wiegmann/File Photo

ZURICH, March 7 (Reuters) – UBS’s (UBSG.S) direct exposure to Russia made up $634 million of the Swiss bank’s total emerging market exposure of $20.9 billion at the end of 2021, the bank said in its annual report.

Switzerland’s biggest bank said while its direct exposure was limited and had been reduced since year-end 2021 this could be affected by sanctions and other measures.

“Our current direct exposure to Russia, Ukraine and Belarus is limited,” UBS said. “However, market closures, the imposition of exchange controls, sanctions or other measures may limit our ability to settle existing transactions or to realise on collateral, which may result in unexpected increases in exposures.”

That included open transactions with Russian counterparties, including both Russian banks and other Russian entities, it said.

Its Russian subsidiary additionally held some $51 million in net assets not reflected in the total amount.

The global banking industry has been thrown into turmoil since Russia’s invasion of Ukraine, as Western banks exposed face fallout from the resulting sanctions on Russia and as financial markets show signs of stress over the potential wider economic fallout. read more

UBS highlighted risks from heightened threat of cyber-attacks as well as the risk of not quickly identifying client activity subject to new sanctions.

“We are working to implement sanctions imposed by Switzerland, the US, the EU, the UK and others – all of which have announced unprecedented levels of sanctions against Russia and certain Russian entities and nationals,” Chairman Axel Weber and Chief Executive Ralph Hamers said in a letter to shareholders.

UBS, the world’s biggest wealth manager, said it had identified a small number of global wealth management clients subject to recently introduced sanctions, with total loans outstanding to such customers amounting to less than $10 million.

The Zurich-based bank said as of March 3 its wealth management business also had around $200 million in so-called Lombard loans – loans to wealthy customers secured against stocks or other assets – and secured financing backed by Russian assets as collateral.

The wealth management business’s gross loans at end-2021 totalled $234.1 billion, based on the annual report.

In Weathering the Economy, Here's a Forecaster You Can Count On | Leeds School of Business

Fri Mar 11 , 2022
Economist Rich Wobbekind named among Colorado’s most influential business leaders. Rich Wobbekind walks an executive-level class through a presentation. His insights on the economy—and the lengths he goes to in sharing them with Coloradans—are why he’s so well regarded, both in the classroom and in the media. In ranking Rich Wobbekind among […] 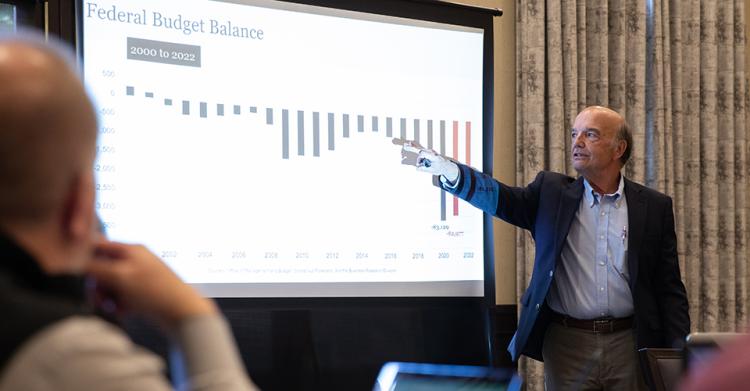