Opinions expressed by Entrepreneur contributors are their own.

At least two-thirds of millennials and Gen Z regularly share memes on social media. The only content more likely to be shared is infographics and travel photos. Visual media is the most important form of communication now. Surveys have found that 55% of 13-35 year-olds send memes weekly, and at least 30% exchange memes daily. Nearly a quarter of respondents said they send memes multiple times per day.

The question on most marketers’ minds is, “How can I create viral memes?”

If your content can incorporate these five elements, your chances of going viral are much more significant.

Related: How to Use Memes to Attract More Attention Online

You don’t necessarily need to treat meme generation as a marketing campaign. Often, the best memes arise organically, just waiting to be developed. Any media event can become a popular meme, even news that seems mundane, such as President Biden falling from a bicycle. It’s harmless news that becomes interpreted in hundreds of humorous ways.

Still, it would be best if you had an idea of who this content will appeal to when you’re making it. It’s impossible to predict if a meme will become viral because its popularity depends on the whims of other people. In that vein, creating content that those in your niche will feel emotionally connected to is helpful. That’s the best predictor of how successful your meme will be. A good example is the dating app OkCupid which shares relevant memes widely to boost engagement on their social media.

The best memes take recognizable content (stills from a movie, pictures from a significant news event, etc.) and put a new twist on it that causes a reaction in people.

In the U.S., memes about politics, political figureheads and inflation are persistently popular. These are topics of constant discussion, so naturally, memes follow. These issues are particularly “meme-able” because there are so many ways to add humor to situations that aren’t humorous.

The flexibility of the mind is the greatest meme-generating tool you have. The meme formats that persist often come from taking a fresh perspective on a movie, news story or media event. For example, Netflix created an Instagram page, Netflix is a joke, where their customers share memes, and that helps the company to gain more audience.

Related: ‘Bird Box’: Breaking Barriers in the Streaming World by Marketing Through Memes

3. A genuine sense of humor

The universal love of memes stems from the fact that, as humans, we love to laugh. In today’s society, many people use memes to connect with friends or strangers over something lighthearted as a momentary escape from stress. Trend reports note that 38% of millennials and Gen Z follow social media accounts dedicated to memes.

Memes should combine what’s trending online with simple, funny text. Humor is subjective, so you may not always get it right, but memes don’t work without a sense of humor. You have to be able to embrace absurdity and laugh at yourself or a situation to generate memes that other people enjoy.

There’s even a neural network called GPT-3 that can use AI and machine learning to generate relevant, funny memes based on just a few words. There are entire meme accounts that create and post content in this way.

Related: This Is How Artificial Intelligence Is Revolutionizing Influencer Marketing

Memes have become a critical communication tool thanks to their relatable nature. The right meme has the unique ability to convey a tremendous amount of meaning within a simple image. Yes, memes are partly used as comic relief, but 36 percent of millennials and Gen Z use them to express feelings, and 28 percent use them when they can’t find the right words to express themselves.

This proves that a viral meme is a relatable one. In most cases, it’s important to remember that a person is looking for themselves in a meme. They want to see something recognizable in the sentiment conveyed. Gucci was one of the first fashion brands that collaborated with Instagram meme-makers to promote the collection of watches.

Related: How to Harness the Power of Internet Memes for Your Business

You don’t need a huge budget, complicated photo editors or deep cuts from pop culture to make a viral meme. However, you do need to understand that creating viral content is always a bit of a gamble.

A meme stays popular until it doesn’t. There’s usually a sharp rise and fall in popularity with memes. One thing will be trending everywhere until suddenly something new shows up, and the old meme is now largely outdated.

The spirit of a meme is to evoke feelings of all kinds in a relatable, often humorous way. Not everything will be an instant hit, and nothing will last forever.

Where will meme culture go from here?

Memes have quietly entered our lives, and they are now even more meaningful than emojis because they can convey more nuanced feelings. Everyone from the U.S. President to Elon Musk is a part of meme culture now (in both cases, they share and are featured in memes).

Anyone can now create a meme about anything. Many people can earn money by making memes and gaining a following on Instagram or Facebook. The only problem with these platforms is how algorithms work. They depend on factors like follower count and the “age” of your account.

YouTube and TikTok have more transparent monetization systems that depend on views, so smaller brands can benefit more by creating exciting and fun content. Other platforms like Yepp share revenue from advertising and help users easily create memes and generate income from their content.

In the future, we can expect memes to become more ingrained in our communication. With the rise of topics like Web3 and digital ownership, memes may become more prevalent in the NFT and metaverse space. For now, meme potential is nearly limitless.

The Rohrer College of Business at 50: Business for the greater good | Rowan Today

Sat Sep 24 , 2022
Rowan University’s William G. Rohrer College of Business (RCB) follows a model of industry for the greater good, just like its namesake did. Founded in 1972 and celebrating its 50th anniversary throughout the 2022-23 school year, the Department of Administrative Studies became the School of Business in 1986 and was […] 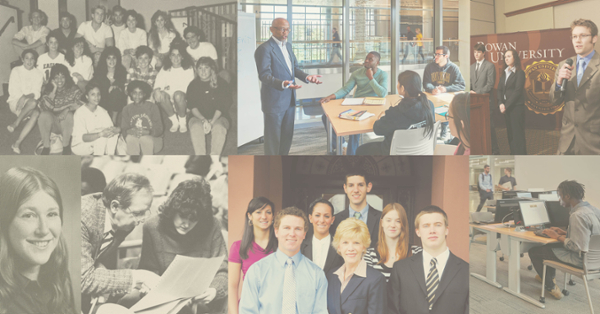