A female boss at a top DC consulting firm tried to perform oral sex on an unwilling male colleague in front of her twin sister and the man’s girlfriend, a lawsuit claims.

Kyle Reinhardt, 53, is suing former boss Kim Cirka, 47, over what he claims was one instance of sexual assault in June 2017, and multiple other harassment incidents.

The US Air Force veteran says he was fired from his $325,000-a-year job at consulting firm Guidehouse last year – despite stellar performance reviews – for refusing Cirka’s advances.

Reinhardt’s lawsuit includes a shocking allegation that Cirka tried to perform oral sex on him in front of her twin sister Kari while his girlfriend Jenn Larsen was present.

Kim Cirka – who denies all allegations – approached him during the alleged June 2017 incident, then opened his bathrobe.

Next, she put her hands on his hips and began performing oral sex on Reinhardt in front of his girlfriend and her twin sister, according to a lawsuit filed in February in DC Superior Court.

That incident happened the same evening that Cirka and her twin sister Kari ‘drank heavily’ at Reinhardt’s apartment, according to the lawsuit.

After he retired to his bedroom with his girlfriend, the twin sister snuck in to watch them have sex in the dark and then ran to the living room to tell Cirka about his penis, it is alleged.

A year earlier in July 2016, a male Guidehouse boss named Paul Bradley is accused of inserting his finger into Reinhardt’s girlfriend’s anus while hugging her, according to the suit.

A third incident sometime in 2015 saw Cirka allegedly get so drunk that she kissed Reinhardt’s girlfriend on the lips without her consent.

Reinhardt helped the firm secure a $110 million contract with the Department of Veterans Affairs. But he says that all the while, he endured a ‘freewheeling drinking and sexual culture’ that was most evident during the all-but-required after-hours schmoozing. 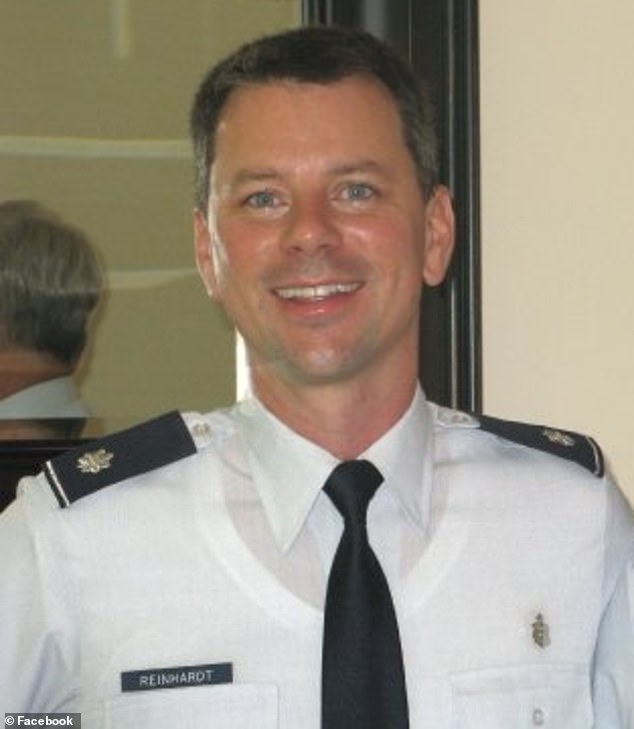 The retired Air Force officer joined the company in 2012 but says he was iced out, put on a performance improvement plan an eventually fired last year for refusing to ‘play the game’ 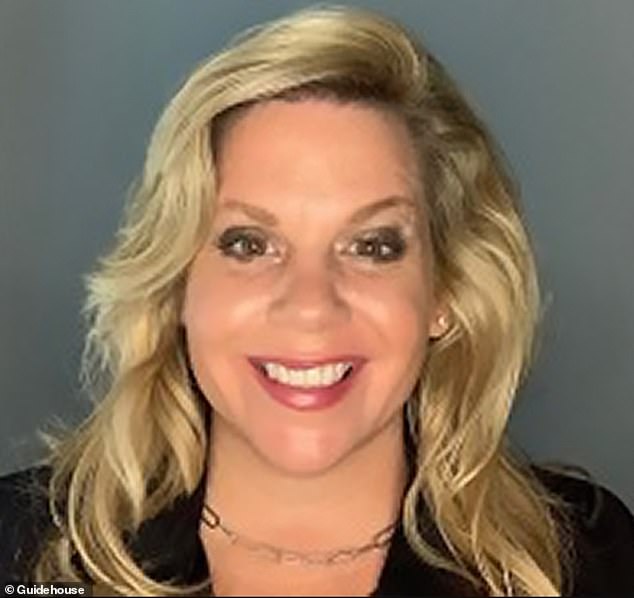 Kim Cirka, 47, allegedly stashed alcohol at work and got excessively drunk at after-work parties and dinners. Once, she leaned forward, put her hands on Reinhardt’s hips and began performing oral sex on him in front of his girlfriend and her twin sister, according to a lawsuit

Reinhardt, a retired Air Force officer, studied architecture at Yale and health and urban planning at Harvard, according to the Washington Post.

He was a senior policy advisor to the Assistant Secretary of Defense for Health Affairs and joined PricewaterhouseCooper, which later spun off its public sector unit as Guidehouse, in 2012.

He began reporting to Cirka, a partner at the firm, in 2015.

Cirka kept wine and liquor at her desk and encouraged other people in the office to drink with her during work hours, Reinhardt claims. At social events hosted by the company, she would often order Chateau Haut-Brion, the Post reports. The wine retails for upwards of $500 without restaurant markup.

He says Guidehouse denied him the three months’ severance that was specified in his contract, but is still enforcing the provision that prevents him from doing consulting work with the VA for two years.

Across 31 pages, Reinhardt details multiple instances in which Cirka and others made him feel uncomfortable during the late-night dinners and parties that he saw as necessary if he wanted to advance at the company.

He often brought his girlfriend along with him to help tame the wild atmosphere, according to the lawsuit.

Whenever he brought up his concerns, Reinhardt says he was told to ‘play the game’ and keep issues ‘all in the family’ if he wanted to move up. 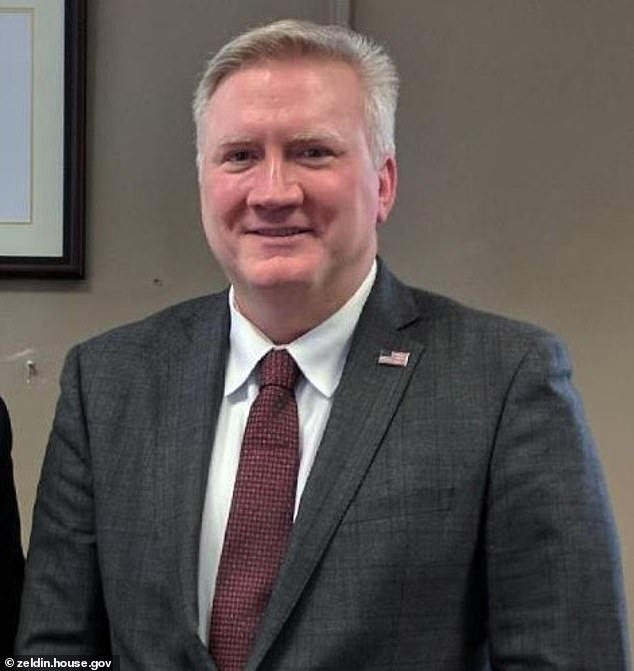 D. Scott Guermonprez, the former director of the Northport VA Medical Center, says he remembers Cirka’s behavior as ‘overly flirtatious’ and said she was ‘fixated’ on Reinhardt

‘I did seem surprised at the time, I guess, at the overly flirtatious way his boss was acting – that she was drinking quite a bit and seemed sort of fixated on Kyle,’ he told the Post.

After repeatedly brushing off Cirka’s advancements and complained about her behavior, he says was placed on a performance improvement plan and fired after the minimum six-month mark in September 2021.

Cirka is denying all allegations.

In a statement to DailyMail.com, her attorney Charles Molster called Reinhardt a ‘disgruntled former employee who was terminated for performance issues and is now attempting to wage a smear campaign.’

The alleged harassment and assault extended to clients and Reinhardt’s girlfriends.

Reinhardt claims that Cirka took an unrequited interest in him early on, fliting with him, touching him and making inappropriate comments about her own sex life.

While having drinks with him and his then-girlfriend Paige Boddie at a sit-down Italian restaurant, an ‘intoxicated’ Cirka got up and started dancing out nowhere.

‘While dancing, Cirka kissed Boddie on the lips in a sexual manner. Boddie neither consented nor encouraged the sexual touching by Cirka.

‘This was the start of Cirka’s practice of acting out in front of Reinhardt’ s girlfriends in order to seek his attention, making inappropriate sexual comments, and trying to intimidate his girlfriends with overly familiar comments and suggestions,’ the lawsuit says.

Other colleagues also participated in the alleged harassment.

In July 2016, while having drinks at Reinhardt’s apartment, Cirka’s deputy Paul Bradley approached Reinhardt’s next girlfriend, Jenn Larsen, to give her a hug.

‘During the hug, he lifted up her dress, pulled aside her underwear, and inserted his finger into her anus. He then walked away without saying anything. Larsen was shocked and got the impression that Bradley had done this before,’ the lawsuit says.

The most shocking incident also happened at Reinhardt’s apartment, a safe space where the terrified employee often steered his unruly boss to mitigate any public embarrassment. 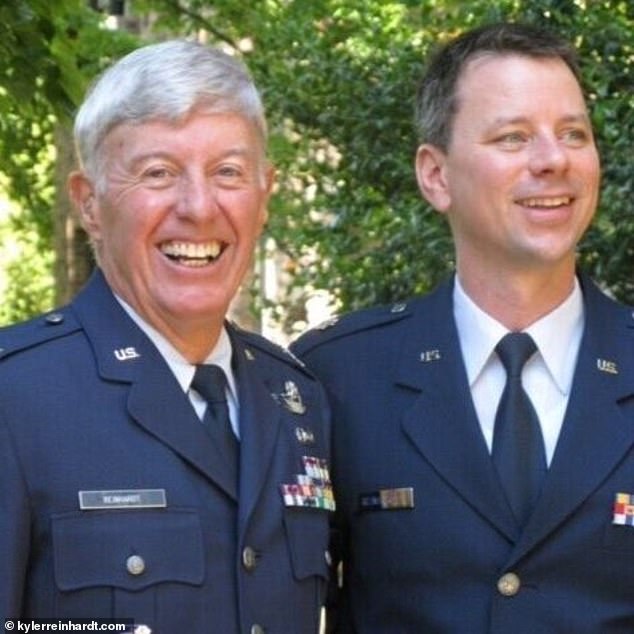 Reinhardt (right) is suing for unspecified damages after he was fired in 2021 and denied severance. He is alleging battery, discrimination, emotional distress, retaliation and violation of wage payment

Cirka and her twin sister Kari Cirka, the former spouse of a NASA astronaut who was visiting at the time, invited Reinhardt to dinner at Acacia, an Italian restaurant in DC.

The twins invited themselves back to Reinhardt’s apartment, where his boss Kim allegedly spilled red wine on his carpet.

Reinhardt called Larsen over for reinforcement. Kim Cirka eventually passed out drunk on her employee’s couch, according to the lawsuit.

‘Rather than make a scene to try to force his intoxicated boss to leave, Reinhardt and Larsen decided to go to bed in the bedroom of Reinhardt’s apartment in the hopes that the Cirka sisters would leave on their own,’ the lawsuit states.

‘Reinhardt and Larsen shut the door, got undressed, and went to bed. After a few minutes, they engaged in sexual conduct with each other.

‘About fifteen minutes later, they looked up to see that Kari Cirka had surreptitiously entered their bedroom and was watching Reinhardt and Larsen,’ the suit continues.

They told her to leave, put on bathrobes and went out into the living room.

‘Ignoring Reinhardt’s command to leave, Kari Cirka instead told her sister Kim that she had just seen Reinhardt’s penis, telling her that “you should see what I saw.”

‘Kim Cirka replied that she had heard about Reinhardt’s “c***’ and wanted to know if it is really large.’

She then tried to perform oral sex on her employee in front of his girlfriend and her twin sister, according to the lawsuit.

‘He could not believe his boss was sexually assaulting him. After a moment, he jumped back and told both Cirka sisters they had to leave the apartment immediately,’ the lawsuit states.

Cirka allegedly encouraged Reinhardt to have sex with Melissa Glynn, who was the Assistant Secretary of Veterans Affairs for Enterprise Integration from 2018 to 2021.

Cirka called Glynn a former ‘party partner’ at PwC who appreciated male attention, according to the lawsuit.

‘Cirka again made numerous comments to both Reinhardt and Larsen that Reinhardt should engage in a sexual relationship with Glynn instead of Larsen.

There is no suggestion that Glynn did anything wrong, and she has not responded to any of the allegations made against her.

Reinhardt says he was encouraged to date and have sex with Melissa Glynn, the former Assistant Secretary of Veterans Affairs for Enterprise Integration. He says he went out with her to a few art exhibits but never did anything sexual with her

Reinhardt obliged and went out to a few art exhibits with Glynn, though he says the relationship never became sexual.

In a separate incident at a bar, Cirka allegedly hugged one of Reinhardt’s friends in ‘a sexual way’ and licked his cheek.

Reinhardt says things changed in 2017, when he was passed over for a promotion and sent on increasingly cumbersome assignments outside of DC while being put up at cheap motels, including one with ‘blood stains on the furniture.’

He was placed on a ‘pretextual performance improvement plan’ for the minimum amount of required time, though his contacts at the VA helped the firm secure a multi-million dollar deal.

‘Reinhardt was not promoted to Guidehouse partner because he repeatedly refused to accede to Cirka’s sexual advances and refused to participate in the improper sexual culture encouraged by Cirka and fostered by Guidehouse,’ the lawsuit states.

He says Guidehouse denied him the three month’s severance that was promised to him when he first joined. The company, however, is still enforcing a provision that prevents him from consulting with the VA until 2023.

He submitted a complaint with the DC Office of Human Rights for discrimination based on sex, retaliation and status as a victim of sexual offense a month later, but he withdrew it in February.

Reinhardt’s attorney, Sam Buffone, says he’s never come across a case like this.

‘I have not encountered a work environment quite like the one here,’ he said. ‘The world of government contracting can often have colorful workplaces, but what we see in the actions here are really beyond the pale.’

Guidehouse and Cirka’s attorney did not immediately respond to requests for comment from DailyMail.com.

Mon Apr 25 , 2022
To print this article, all you need is to be registered or login on Mondaq.com. As we look ahead in 2022, there are several regulatory changes expected during the year which will impact Bermuda entities. With the landscape constantly evolving, we know that organisations will want to stay up […]